We are a professional group of aquarists that are dedicated to improving the color Morphs of the Rocio Octofaciata, better known as “Jack Dempsey.” As proud members of the Atlanta Area Aquarium Association (AAAA) we have devoted our time to bringing together vigorous strains Electric Blue and Platinum Jacks. 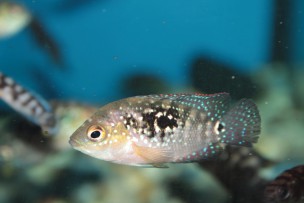 We feel as though these beautiful ornamental fish deserve to be recognized for the awesome natural occurring treasures that they are. Our breeding program helps us to isolate wanted genes and traits to assure that the next generation will be better than the previous generation.

The Electric Blue Rocio Octofaciata is a natural occurring color morph that exhibits a beautiful Electric Blue color.  This color morph was first identified in South America and has been highly prized ever since. Initially there was the question, “Are Electric Blue Jack Dempsey’s really a Hybrid?” But time combined with a great deal of science have helped prove this fish is in fact a pure bred Jack Dempsey.

The Platinum Rocio Octofaciata is also a natural occurring color morph. These rare fish are the result of a double dose of the Electric Blue Gene and Gold Gene inside of the same fish. This makes the Platinum Jack Dempsey twice as elusive as the Electric Blue Jack Dempsey. This color morph can show up in a clutch (group) of Fry (baby fish) in as little as 6.5 percent.